The name Karwar is believed to be derived from the misnomer from Kadwad. Hence we set out to explore what Karwar has inside it. We had heard that there are good picnic spots inside the forest area of Kadwad.
We started from Karwar at around 2pm. Passing through Habbuwada, Sonarwada, & Bandishitta, we reached Shejwad. I recollected the memories of when I used to come for swimming here in a water body. Then we passed through the railway station in Shirwad. We reached to Kadwad which is at distance of 8 kms from Karwar. Mahadev Devasthan is a temple famous for its annual Jatra.
﻿

During 2009 monsoon, Jariwadi in Kadwad had suffered a landslide due to which more than 20 people had lost their lives and land had shifted to around 500 metres away at that site. We got a chance to get the glimpse of this tragic site on the way. The places after that were completely calm and serene from the distant hussle of the crowded Karwar. We could rarely see people walking around. It was a completely different experience.
On the  way, we came across beautiful temples like and with beautiful mountains in the background.
﻿ 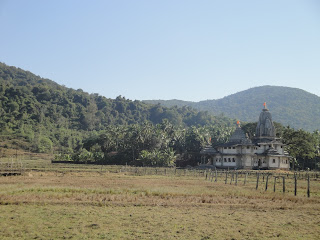 We passed through a bridge which had river Kali remains flowing below it.  We reached Nagekoil at a distance of around 30 kms from Karwar. We took a right turn from Nagekoil and after 2 kms we reached to our destination. A beautiful picnic spot with remains flowing across under the shade of greenery.
﻿ 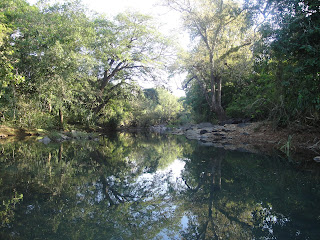 We reached Baithkol at around 9AM. ﻿﻿Baithkol, situated at a distance of just 2 kms from Karwar, is the village bay where the boats and launches park after their hectic routine of fishing. Until we were waiting, (with the fish smell all around) for motor boat which we had hired, we enjoyed watching tonnes of fish getting unloaded at the dock. We also got a chance to try a hand on fishing. As soon as the motor boat arrived, we set sailing to our destination .﻿

Baithkol port in Karwar is a natural harbour, one of its kind, formed by mountains. As we passed through all the fishing boats on the left and a huge ship from parked on the right, we saw the break water built by stones over a stretch of  400 metres to slow down the huge waves during bad weather . After that it was blue everywhere. We were right in the middle of . We could see few islands far from us, straight ahead was Devgad with the Light house, and on the right, 6 kms  away, was famous for its annual Narsimha Jatra. We also got a glimpse of which is on the other side of the mountain beside Baithkol. During British rule, the wives of British officers used to come to this beach to have bath while enjoying the nature, since it offered complete privacy from rest of the town. On the way to the island, around 1.5 kms away, were the shipwrecks of registered vessel M V Ocean which had drifted towards the island on account of rough weather and hit rocks in 2006. Due to this, there was a huge oil spill extending upto and had severely affected the acquatic fauna and flora. The ship was later broken down to pieces and carried away to Karwar bay.
﻿

﻿Finally, we reached Devgad. The entrance of this island was as of the entrance of the ancient times. We anchored our motor boat, got off on the rocks in front of the island and entered through the entrance heading to the top of the mountain. The mountain has a Light house on the top which is powered by solar technology. We had special permission to enter the Light house premises.

The view from top of the light house was mesmerizing. Light blue sky merging with the deep blue sea at infinity was delight to our eyes. We got down from the light house to go towards the beach and oyster rocks on the other side of the mountain island. 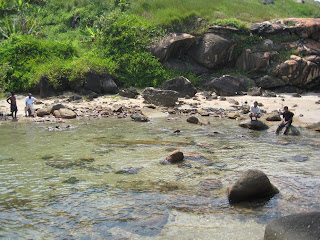 Down below with the rocks, beach and the mountain, Devgad Island,  I feel is a best place to camp and spend a complete day in the nature’s warmth.
Posted by Akarsh at 1:10 AM 1 comment:

I am a regular traveller to Karwar since it is my hometown. I take a private bus and make sure it is sleeper and upper berth because i cant afford to miss the scenic beauty when the bus is about to reach Karwar.
My eyes get opened in the morning to a sight of mountains covered in mist on the right hand of the bus. I wonder if i have crossed Ankola already. Yes, I have. I gear up myself to what i feel the most beautiful scenes i have ever seen. To have huge misty mountains on the right and deep blue sea on the left while the bus travels through the Western ghats is mind gasping. 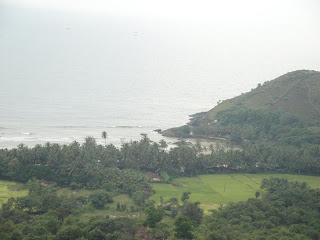 As i reach the top most point of  harwada ghat(haidi), (which has rumours of possession of ghosts, and thats why as many as 3 or 4 idols of God have been installed) my eyes stop blinking to the sight of first encounter of vast sea along with the mountains. As i make my way through Chendia, Arga and Binaga, the blocked walls of Sea Bird project(INS Kadamba) restrict us from other beautiful attractions. Then the countdown starts for the place i have been eagerly waiting for. As the bus makes it way down the binaga ghat, i see ships docked at the baithkol port and huge blocks of granite stones standing there waiting to be exported to their destinations. After crossing the port, i see myself piercing the junction of Western Ghats and Arabian Sea to reach my hometown Karwar.
Posted by Akarsh at 9:26 PM 1 comment: